I’ve got a stack of to-be-read summer fun books as high as my mounting existential dread as summer draws to a close, but I wanted to offer my takes on two summer fun books I did manage to read and can highly recommend. On the surface, they seem like an odd couple—one of the biggest blockbusters of the summer, and a new, indie book by a new indie author. One a righteously bombastic thriller, the other a sensitive queer romance. But they’re both my type of book, and maybe they’re yours. Do you like books that are rough at the edges but with prose like good whiskey? Do you like books that drag you into their dark depths and swallow you whole, only to spit you out at the last word, leaving you breathless and—not happy, exactly, but shaken, changed, for the better? Both of these books are that type, and they’re great summer reads because they’re that “compulsively readable”—they’re the type you want to read, that doesn’t feel like you’re in a Great Texts class, no offense to those books (which I also love, but, eh, you know).

Adrian McKinty’s The Chain is basically winning the buzz wars this summer—and rightly so. It’s a taut thriller with a protagonist too human and vulnerable and perfect not to root for. Cancer survivor (or did she survive it?) Rachel, recently divorced, finds herself in the midst of every parent’s worst nightmare: her young daughter is kidnapped. And Rachel is now a link on The Chain. The diabolical plot of the Chain (you must pay an affordable sum but then kidnap someone else’s child and continue the chain before yours is released) is a wicked bit of torturous fantasy—what we fear most playing out before our eyes. Look, you can read more extensive reviews that go through the plot elsewhere. There are two things I want to say about this book to make my case for why you, why everyone, should read this book.

First, McKinty manages what few thriller writers do: it’s a thriller, sure enough, but it’s a realistic portrait of what trauma does to human bodies and brains. It’s about bed wetting, fragmented attention spans, that cataclysmic hyper-vigilance that drains the world of its color and holds you prisoner long after you’ve been released—holds you prisoner until you realize that trauma is the guard who never releases you. Not until you heal, on your own, your trauma never your fault but your healing always your responsibility. In some ways, a “summer read” that throws such heavy shit at you is difficult to talk yourself into. But I think those of us who love thrillers, mysteries, and so forth would do ourselves good to remember what it is that we’re reading: trauma. The point is not to escape. The point is to build a new world after the old has been destroyed.

The second thing I want to talk about is McKinty’s other books. Seriously. You should read The Chain, sure, but it’s honestly not as good as his other books. That’s not a slam to this book; it’s hyping his other books, which are OHMYGODGOOD. You really, really need to read the first novel in his first series, Dead I Well May Be. And then you need to read the whole Dead trilogy. And keep going. McKinty’s a fierce, lyrical, relentlessly dark writer who understands human frailty and fear and faith better than most any novelist writing today. I discovered Dead I Well May Be in a public library when I was eighteen years old, just a bit younger than the protagonist. I started reading that book, and really fucking hated the protagonist. (You will too, I promise.) By the end of the book, I didn’t hate him any less but god, I couldn’t look away from him. Not because he was redeemed—he wasn’t—but because he was a shabby, selfish, angry kid who was also relentless, resilient, funny as hell, and a bit mentally off. He does find a measure of redemption through the rest of the trilogy (hope that’s not a spoiler) but the real payoff in those books is two-fold: McKinty writes gorgeous prose, and he writes beautifully broken people. I say beautifully broken because they’re not traumatized innocents—they’re compromised, ordinary people who struggle to make good choices but who are nevertheless called upon to do extraordinary things. And sometimes the most extraordinary thing is being okay with not being okay. McKinty writes wild, ferocious, larger-than-life adventures about life-sized people.

McKinty’s published with a Big 5 publisher now, and he’s earned the accolades through a decades-long career that hasn’t until The Chain seen the lift he deserves. On the other end of the spectrum, I just finished a novel by a debut indie novelist—no Big 5 marketing onslaught in sight, just a quiet slip of a novel that, much like McKinty’s, packs a supersized punch. 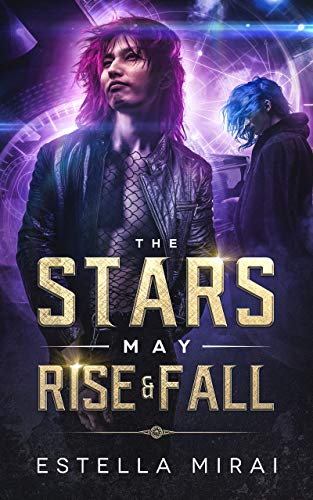 Estella Mirai’s The Stars May Rise and Fall is pitched as a gay retelling of Phantom of the Opera, but it’s got a spare elegance to it that makes it richer than the sum of its parts. Teru, the stage name for our protagonist, has come to Tokyo to perform glam metal visual kei music. (Full disclosure, I’d never even heard of this musical genre before—I’m more the actual-opera-in-a-really-opulent-theatre type, which, okay, is very annoying. Duly noted.) Teru is a more wary, world-weary ingénue than we’re used to, and Rei’s grim, scarred Phantom is both crueler on a small, petty human scale and more vulnerable and kind than we’re used to, as well.

If I’ve mentioned it’s based on the Phantom, then you can guess the rough outlines of the story, though the narrative line takes a departure pretty quickly that sets it on a unique trajectory. (Don’t worry, no spoilers.) The world of Japan’s glam metal scene is sparingly evoked. (Full disclosure, I don’t know anything about Mirai, except that it’s a pen name, and I don’t know if this book is #ownvoices in any way at all; I’m also not familiar with this music or with Tokyo itself. You get the point. I can’t speak to the authenticity or to the accuracy.)

The main thing that sets this novel apart is that the members of La Rose Verboten (the band), especially Teru and then Rei, are mortals in a messy world. Similarly to McKinty, there’s a haunting humanity here. When Teru sees Rei’s face for the first time (not a spoiler—come on, you know that happens), how he reacts is gutting. It’s awful. It makes you hate the protagonist, but only because you see yourself in him…and you wanted to see something lovelier. When he indulges in fantasy (and isn’t that what the Phantom story is all about—our proclivity to spin fantasies around the lives of others?), Teru half-recognizes his own indulgence. “His voice trembled on the final note, and he grimaced,” Mirai writes. “The half-fabricated tragedy had worked too well.”

Unlike the Opera, this novel isn’t an outright tragedy, but it also isn’t a frothy romance. It’s good, though. Really good.

So, go read them both. The Stars May Rise and Fall will satisfy your need for romance, and The Chain will satisfy your adrenaline craving, but they’re both so much richer, sadder, and more hopeful than either of those genres typically conveys. There’s only so much summer left; I recommend spending it reading beautifully crafted stories about how innocence is lost, and how something better can be forged in the ruins—something maybe like courage.